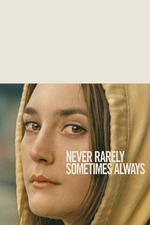 one of my most anticipated movies of 2020, and i am far from being let down. after watching beach rats, i felt like eliza hittman is a master at conveying the rawest of emotions with the most subtle details, be it the movement of a hand or the flicker of an eye, and never rarely sometimes always is only further proof of her outstanding abilities.

as we follow autumn and her story, hittman’s style, slowly but surely, draws us in and, almost unconsciously, puts us in her shoes. not through flashy soundtracks or loud dialogues, but rather through short yet effective conversations and silent gazes. silence. i don’t think i’ve ever seen any other director use silence so poignantly and with so much care, almost as if it was china, that, once dropped, can never be put back into its previous form and beauty. like with beach rats, however, the silence as a whole just feels so loud. loud because this movie has so many things to say. loud because, even though autumn rarely talks about her feelings out loud, we seem to feel so much of her pain.

whenever the specious silence is broken, however, the film turns into an even more powerful symphony of wonderful cinematography, beautiful soundtrack and sharp dialogues. the eponymous scene was probably one of the most powerful scenes i have ever seen in a film, and i was left in awe. the decision to stay on autumn’s face as she answers all these questions, and the repetition of “never. rarely. sometimes. always.” left me shaking with goosebumps and tears in my eyes.

it goes without saying that this film would hardly be as raw and intense as it is without both the impressive cinematography (loved the 16mm!) and sidney flanigan’s transformative performance which makes it hard to believe that this was her debut. her acting was simply incredible and drew me into the story right from when she first appeared on screen.
the only thing i had some issues with for the first half of the movie was the pacing. while i don’t really struggle with watching slow-paced films, a few shots and scenes felt a bit like they dragged on without any real meaning to them. nevertheless, it didn’t really affect my experience as a whole!

all in all: a raw, honest and powerful character study, never rarely sometimes always masterfully tackles feminism through the eyes of a young woman, and is a movie that should not only be obligatory for young girls and women to watch, but just as much for men and everybody else.

on a completely unrelated note, the theater i went to had the weirdest seats that felt comfy at first but then made my neck hurt and actually made me DIZZY while watching the film?
and i finished taking all my exams! even though i probably failed this semester and will switch to mechanical engineering. oh well. at least i can use all of next week for watching films!!