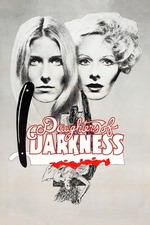 The short version: Weekend at Marienbad but with psycho-sexual tension to the power of 69.

"After a while, it'll only be the remembrance of a bad dream, and then the remains of a remembrance. More and more faint in your mind. I have seen many a night fall away into an even more endless night."

The less short version: Daughters of Darkness is one of those movies that has remained suspiciously illusive to me. Nearly each time it is mentioned, receives universally praised as a classic. With such a standing reputation and having been made in my home country, it somehow managed to escape my eyeballs time and time again. After a blackout, a scratched disc and my last attempted screening being canceled due to the C-word, I half expected gremlins to take over the projector this time around. It's like the old saying goes; all good Belgian lesbian vampire movies come to those that wait (It's a very local saying, used only by me). It was well worth the wait! I got to see it with live music by Condor Gruppe and in the presence of the director who, cherry on top, sat right in front of me and (besides being an absolute hoot in every interview I've seen him in) also gave occasional live commentary about his movie. I couldn't have asked for more!

A lot has been written about Daughters of Darkness, so I refer you to the ubiquitous resources produced by more pen savvy scholars for such a deep dive.
Coincidentally having spent the day of the screening in both key locations of the movie; Bruges and Oostende, really added an extra eerie layer for me. The film already has quite some surreal elements but the fact I could draw so heavily upon my own memories of these locations really magnified the dreamlike qualities of it all. It's quite rare to see a movie play out in the past of cities I lived, worked and studied in, let alone one featuring the countess Bathory.

Daughters of Darkness isn't quite as pornographic, violent or bloody as its reputation would have you to believe. One has to keep in mind that this reputation was founded in a different time and the scene of Belgian horror movies isn't exactly a crowded one, let alone one with art house allure. So adjust your expectations to meet moral inflation. That being said, I wasn't disappointed at all (Having seen The Hunger only recently I was very underwhelmed as it didn't live up to it's reputation at all in my opinion).

The power of suggestion is the primary "horror" in this feature. Power dynamics, class separation, control, dominance and submissions are all using vampirism more as a star spangled blanket.
This is more of a super stylish erotic thriller than a straight up horror flick.
Delphine Seyrig's portrayal of Elizabetha is quite ambiguous and radiates an anodyne beauty. She likes to toy with her prey, and appears both vulnerable and troubled. Sometimes titillating, sometimes nearly somniferous. Like a Venus fly trap, she will lure her prey with beauty and the facade of tenderness, while slowly consuming them.
The passing of centuries have made her jaded and while virtually immortal, she does put herself in real danger to raise stakes (pun not intended) so her vulnerability is not a complete act. The countess is more of an it's-the-journey-not- the-destination kinda gal.

This screening was such a memorable experience, I'm pretty sure I'll not revisit it soon for fear of disappointment. Seeing it in a theater with a strained glass window as a ceiling and an interior that was as ornamental as the movies set pieces, accompanied by a grandiose live soundtrack and seeing it basically on the couch with the the director won't be easily surpassed.

| The verdict: Let the dead bury the dead.