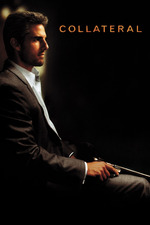 "A guy gets on the MTA here and dies, do you think anyone will notice?"

This is a solid screenplay in every sense of the word, constantly developing the characters through sharp and contemplative dialogue. Pushing the plot towards with super thrilling action sequences, utilizing the neo-noir vibe of late-night LA, and met with extremely convincing performances from both Tom Cruise and Jaime Foxx.

What makes the story incredibly convincing is that the antagonist has everything the protagonist lacks. Which causes Jaime Foxx's character to constantly develop and change as he confronts the antagonist for most of the film. Their different viewpoints are constantly colliding and interfering with each other, which keeps the audience invested in what's happening the whole time. It's not just dialogue though, the climax of this film is so thrilling, I don't even know if "thrilling" does it enough justice, it kept me on the edge of my seat for a solid 30 minutes and does not stop for anything.

Like damn, this was my first Michael Mann film, genuinely was blown away on all fronts. Did not expect something this engrossing and engaging.