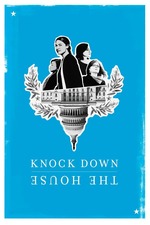 AOC a bad-ass for real. This documentary was immensely inspirational, 4 women rising up to beat some of the most powerful democrats in the country. But the documentary itself, it fell flat in a lot of places. The first 20 minutes are really rough because they just jump around to a lot of places and even when it gets better afterward the other three women do not get enough screentime, their part of the story is half-baked and isn't focused on enough.

Like I get that AOC was the only one who won and succeeded but I think you should still tell the story of the other women who had the guts to stand up. You should either focus only on AOC or focus on all 4 of them equally. But I still think the documentary got its message out clearly and is incredibly inspiring. I recommend you watch it, Netflix actually uploaded the entire thing on YouTube for free.