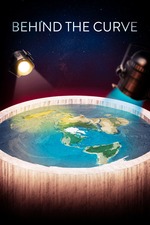 as it was said in the film: laughing won’t make it better and we should care to make this people believe in science as they don’t do it not because they’re dumb but because the education system has failed

In Vogue: The Editor's Eye