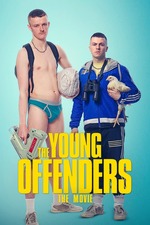 I forgot to review this from when I watched this a while ago. This film is absurdly stupid that it plays into when it comes to the comedy. I did enjoy this film, namely because it didn’t take itself seriously, but the plot in the second act started to become a little too focused on constructing the plot, which equally was probably needed but made the story start to drag in places. However, the characters are pretty great, the idea is quite unique, and overall, even though I can’t entirely recall anything in terms of quotes after letting time pass, I still remember having a good time with the film.