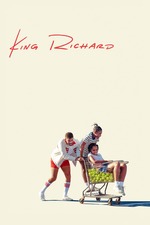 Will Smith does a terrific job encompassing the character of Richard Williams.

King Richard does a phenomenal job of storytelling. In an era of media, Black fathers are crucified for believing in their children and challenging them to reach their potential. This film displays overbearing parenting in a more positive light that dismisses the outlandish claims made previously.

Suppose you have no idea who this Richard Williams is or Serena or Venus Williams is, do not fret because Richard ( Will Smith) will let you know any chance he gets. The  film quickly immersed me into the plot, displaying Richards' determination to get his daughters to the next stage in their tennis careers. The film continues to leave no time for boredom by establishing vivid setting and climate while also informing us of the movie's mission —telling the story of how a father believed in his daughters.

I was thoroughly engaged with the film depicting real-life issues the Williams family faced.

For example, living in a rough neighborhood and low economic status was watered down to fit family viewing. Yet, it was necessary to focus on the plot. Just as Richards planned the Williams sisters' lives, everything in the film seems strategic.

The film replicates the likeness of most characters to their real-life counterparts and some of the interview dialogue are  from actual interviews incorporated in this film.  While adding some quips such as "ghetto Cinderella." It’s clear to see that they paid attention to detail.

Will Smith does a terrific job encompassing the character of Richard Williams. From the accent, tone, mannerisms, and outrages justified outburst. It is clear to see Smith's brilliant range in another delightful film.

Verdict: King Richard is based on a true story, showing the true beauty of believing in yourself and your children . I learned more about the Williams story, felt some emotion, and had a great time overall, especially given the movie is over 2 hours long. Worth the watch? I say yes!

Does King Richard bring me to paradise? Yes! 4/5.