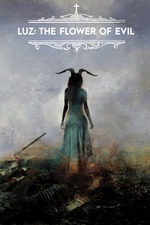 Luz: The Flower of Evil

A -’s review published on Letterboxd:

There is merit in a cult horror movie that explores the psychological reality of its members.

Luz: Flower of Evil paints a world of cartoonish extremes - it’s hideous violence contrasting against the pictorial, unreal aesthetic of the whole thing. The spiritual gibberish and sense of unreality really do take the audience into the minds of the cult’s members - a place where the beauty of God’s creation exists side-by-side with impenetrable logical loops and a sense of impending doom.

Whereas The Wicker Man and Midsommar are structured and logical films about illogical subjects - Luz: Flower of Evil does not have similar control or restraint. The result is messy and hard to get to grips with - none of which is a problem within itself - except that it feels like a film out of control. Without going into spoiler territory the film has some particularly grisly and upsetting images - which, again, is fine- but it doesn’t amount to anything. It feels like unpleasantness for unpleasantness sake- something I have zero tolerance for (be as fucked up as you want as long as it is amounting to something)

It has an embarrassment of interesting ideas, but none of them are explored fully- the film is too busy shepherding you to the next unpleasant incident.

This is a film all the more frustrating because of its potential to be something special. However, for me, it feels more like a compilation of derivative scenes rather than its own distinct product.

A is using Letterboxd to share film reviews and lists with friends. Join here.