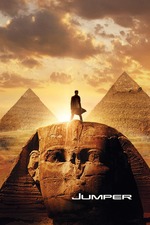 Totally dismissed this on first viewing, did not like it but it benefits from Hayden Christiansen's doche Anakin persona, David is not a good guy, Hayden umplifies this and it works. Gone is "With great responsibility" David got power as a kid and abused as a kid would, he escapes responsibility at every turn, not saving the people who are trapped by a flood, on discovering that he's being pursued by people who are aware of his abilities, he goes back home and endangers his family and his old school crush, this movie should be called Teleportation Dick, David is a Man Baby and Hayden Christiansen plays him perfectly. Jamie Bell's character is alot more interesting and I would have preferred his movie, Samuel L Jackson is good at villain duty but that He-man, I'll get you Gadget eye roll at the end is embarrassingly hilarious. Overall the film moves quickly and has some decent action set pieces but suffers from Next Time Baby syndrome, the makers were sure there would be a sequel but alas no. An OK action flick.

A Cure for Wellness