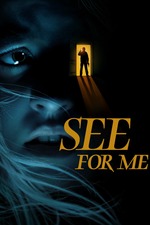 The choice to cast a legally blind actor was a good one, as its clear that Skylar Davenport's unique perspective allows for a performance that feels exactly what it is, lived in and real. It's unfortunate, though, that their solid acting work is on such a shallow and fairly unlikable character. Sophie doesn't want to be helped and she makes that very clear throughout the film, which of course plays into the plot because she simply cannot survive this home invasion without assistance from Kelly, the Army soldier and first-person video game expert who conveniently gets connected to Sophia via this app that allows someone to be your eyes by way of navigating using your cell phone's camera.

The premise is interesting, but quickly shows itself to be completely unrealistic. It's just too big of a stretch for me and very little actually happens. Sophie herself is also a bit of a morally gray character, and while I was never rooting for her demise or anything, one could ascertain that on some level she keeps herself in the dangerous situation for selfish reasons when she could have escaped. The character even calls herself out for this at one point, but it's never reckoned with beyond that in a meaningful way.

I do like that Sophie's journey is about learning to trust, and there is one really well shot scene toward the end of the film where she uses her heightened senses to her advantage. It plays out a lot like a stealth sequence in The Last of Us would, as if Sophie was trying to avoid a Clicker.

I wish this had been more interesting to me but I was so glad that it was only 90 minutes long because I was disinterested, unconnected, and wanted it to be over. I don't think it's "bad" filmmaking, and I really do applaud the attempt to make something interesting with an impaired character, but the story just never got to a point where I felt I could take it seriously and that made everything else fall apart for me.