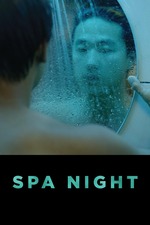 What are you looking at?

Ahn's tale of sexual awakening is a story told in glances, shifts, and sighs. Like Haynes' impeccable melodrama, Carol, Spa Night uses the setting's sexual repression to keep the emotions covert and unspoken. Furtive glances are shot at spa attendants probingly. The spa, awash in cool neon blue, dampens the steamy emotions that float above the patrons. And, it is in this otherworldly atmosphere that David appears his most comfortable - even if there is, initially, hesitation.

And, for the most part, Ahn's remarkable restraint pays off. The performances all around are spectacular. However, the script can't quite measure up. Though the tale is appropriately subdued, the dialogue feels stilted in scenes. Certain characters say things that feel purposefully crafted to shuttle the plot along.

Still, this is one of the best films of 2016. Between this, Moonlight, and Carol, I'm really liking the subtlety of these stories centered around LGBTQ+ folk. I give Spa Night a 4/5.