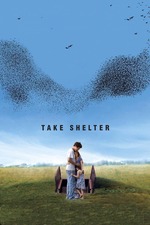 It's interesting how often my broad art consumption syncs up with events or feelings in my personal life. Recently I've been playing through a game called Night in the Woods which has captured the feeling of isolation every twenty-something begins to feel trapped between academia and moving on to the professional world.

But, I also noticed, tonight, how Take Shelter - a masterful film I only just re-watched lines up so precisely with the stress I'm feeling right now. Back in October I had a presentation for a class for which I was totally unprepared. I had mixed up the date, so you can imagine my surprise when the teacher called me up to discuss the nuances of a book I had only just begun to read and about which I was only preparing to speak about in another two days (oh yeah, and just because fate hates me, this book was written by the professor herself). It was - in a word - *horrifying*. It's funny, though. In the moment, it feels not just like the sky is falling, but like you're in free fall; plunging into the sunken place. You get sweaty and numb and your stomach knots up like a devilish clown has tied up your stomach instead of the end of a blown up balloon.

Today I realized that a film I wrote about in an essay for a class was in fact, not the film we were meant to watch. Instead, it was an entirely different one. I also turned the paper in late, because - due to this past hellish week's chaos, I lost track of the assignment and turned it in late. So, naturally, I feel stressed and horrified and completely dazed. A train has just struck me where I stand. I feel the same knot, I feel the same sweat, I feel the same plunging feeling I felt several months back.

But, unlike that error, this time I have context. It isn't the end of the world. I made up the error with other assignments in that class. And, I'll do the same with this class. But, even more broadly than that, contextualizing stress is something that I've only learned to do slowly over the years. I know that this isn't a huge deal in the grand scheme of things, it just feels catastrophic in the moment. And, returning to art helps with this process of re-contextualization.

When I watch Take Shelter I realize that my problem is not of the magnitude that Curtis feels when he struggles to open a shelter door for fear of what lays in waiting on the other side. My anxiety is something that feels grand in the moment, but - in truth - is relatively insignificant. I'll probably be fine. I'll make it through the semester and this one mix up won't negate all of the work I've done elsewhere.

But, time and time again in my life I've come to learn that contextualizing my problems requires two things: one, returning to art, both as an avenue for exploring others' experiences and as a way to reflect on my own experiences and two, and this I think is the more important of the pair, taking the time to extract myself from where I am and breathe. There will never be a more opportune time to go out to that local bridge and breathe in the nighttime air than when you feel suffocated in your current situation.

It reminds you that this is a scene in a broader narrative. Which sounds incredibly cliché and it is and some anxieties are too big to go away with a simple walk. It's going to take a whole lot more time and space to get over the anxiety of, say, normalizing the sudden loss of someone you care about. But, space and time - explored through art and through physical extraction - have been the keys to tranquility for me.