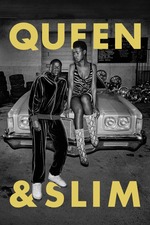 Queen and Slim is a very different film that what I expected, despite its grim subject matter the film isn't very political. In fact, Queen and Slim never feels preachy because it doesn't seem to have much of a message, but rather it finds beauty in life, love, and the world around us.

It's easy to drown in the horrors of police brutality and racial profiling that surround many people in our nation on a daily basis. Many films in the past few years have tackled this same issue, with grandiose protests and bold speeches empowering characters (and hopefully audiences) to speak up and try to make a change in the world.

Queen & Slim instead decides to develop its characters as people who are largely uninterested in the political ramifications of their actions, but rather they just want to live, to be remembered, and to be together. They aren't looking to be heroes, legends, or even inspirations, but rather they just want the kind of life that anyone else would want. Queen & Slim doesn't try to provide an answer to these issues, because we already know what the answer is.