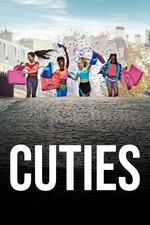 A spiritual elder arrives at the home of Amy, age 11, and her mother Mariam. He's commissioned by an aunt who's concerned about Amy's alarming behavior. The family's just moved from Senegal to France. And Amy has made some new friends which has caused her to change quite a bit. The elder patiently examines her and concludes that "There is no devil or evil spirit here." This declaration applies to the film as well. Cuties is not an easy film to watch. It was born out of the directors own discomfort with the hyper-sexualization of girls at such a young age. And if you had an uncomfortable time watching the film, congratulations. You passed the test. It shows that you're concerned too.

Netflix's boneheaded marketing campaign did this film no favors. But the outrage over the marketing choices should not extend to the actual film. Maïmouna Doucouré's debut has exposed a great hypocrisy across many cultures. Cuties is an exploration of one young girl's attempt to fit in. Not only with her immediate friend circle. But with society's warped expectations for women of all ages. And if you've seen the film, you know that Amy recognizes this more than anyone else. The film's told from her perspective. And much of the outrage, which is centered around the suggestive dance routines, are shot directly from her point of view. If you picked up on this, you realize that you're not as much of a voyeur as you think you are. You're more of an auditor of our culture. You're examining what it tells young girls to value, what to prioritize, and what to pursue. And I hope that you're outraged because of it.

Amy's friendship with Angelica, Jess, and Coumba is a good thing. They share similar interests and are kind to one another (for the most part). Their camaraderie is a welcome thing even if what they bond over may seem unseemly. Amy's other outlet, if the Cuties weren't an option, is her Islamic faith. But as displayed in the film, it's an extremely regressive and hypocritical practice. Not only for her, but also for the women around her. And depending on one's views, both paths can be liberating or restrictive. But they can also exist simultaneously while being filled with double standards and pretense. Her father taking another bride while her mother has to grin and bear it is a prime example of this. Women in her culture (or any culture) would never be allowed such privilege. So she follows the secular path with the rest of the Cuties that is no better for her development. But at least there's no pretense.

The bottom line is this: There are many who feel self-conscious while watching these young girls sexualize themselves. But at the end of the day, it's Amy who displays the most discomfort at numerous points throughout the film. Not on any religious or moral grounds. But simply because she recognizes that this isn't the way. She doesn't say why. And it feels like she can't articulate it at this point. For her, it just doesn't feel like the right thing to do. But we know why. And as she gets older, she'll come to understand it as well.

*NOTE* For a woman's perspective on this issue, check out Letterboxd user Nikki's review here. I really enjoyed what she had to say.