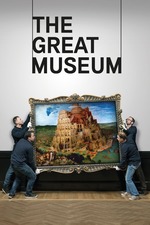 Captured over a period of more than two years and constructed in the direct cinema style (with no off-screen commentary or interviews, no background music and no scripted dialogue whatsoever), director Johannes Holzhausen’s utterly engrossing new fly-on-the-wall documentary offers viewers a fascinating and exclusive behind the scenes glimpse at one of the world’s foremost cultural institutions, Vienna’s Kunsthistorisches Museum.

Attentive and observant in its composition (frequently honing in the most seemingly insignificant of tasks), shot with great cinematic ambition and precision, and predominantly focusing on the day to day work of a passionate and highly devoted staff, each of whom work tirelessly to ensure and maintain the incomparable levels of detail and quality expected, Holzhausen’s film proves a work of deep reflection, poignancy and patient observation, and a more than fitting paean to its majestic subject.

Over the course of the 90-minutes we spend immersed in this captivating cultural world, we play witness to many of the various minutiae and machinations that keep the multitudinous internal cogs and gears turning. From meticulous restoration processes (including the search for destructive beetles on the surface of painting and the study of a Reubens sketch that appears to have been painted over years previously) and heated boardroom discussions (on everything from budgetary concerns, national identity and the specific fonts used on banner images), to the work of the cleaning staff, guest services team, conservationists, art historians and financial team, no subject or micro-drama appears too negligible to escape the camera’s profound and observant gaze.

Having graduated from the University of Vienna with a degree in art history, Holzhausen is the perfect candidate to helm such a piece. His clear sense of passion (combined with a feeling of privilege, respect and a multi-layered understanding of the various processes explored on screen) resonates deeply throughout, and there is a distinct relationship of trust conveyed with the eclectic members of the creative team featured.

I’m yet to see master documentarian Frederick Wiseman’s latest opus, the 180-minute, National Gallery, however if previous festival reviews are to be believed then I can’t image it will make anything less than the perfect companion piece to Holzhausen’s superb The Great Museum.