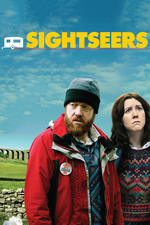 Sightseers is totally unconventional and off the rails and also bloody brilliant. The director, Ben Wheatley (this is the first film I've seen of his), has balls that are rarely seen in Hollywood. Oh yeah, this film is extremely un-Hollywood; it's very, very BRITISH and I'm such an American ('the FUCK is a caravan holiday? a glorified road trip?) that a few of the cultural references probably went over my head, but that didn't bother me in the least.

I think that Sightseers has qualities that are bound to unnerve certain viewers, sorta like if you've ever seen anyone squirm while watching Funny Games.

I loved the characters, Chris and Tina, because at first sight, they are just so damn average. But as the film progresses, you learn that they're anything but average.