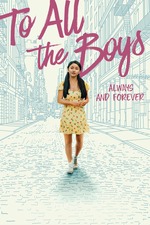 The whole “choosing to go to two incredibly great schools because it defines your future while dating your “the one”” trope is not relatable content. While this series purports to be a more realistic teen rom-com, it falls into every trope without fail. Simply downplaying them doesn’t erase them. I do appreciate that the film emphasizes a mutual partnership in the end, but Laura Jean’s idealistic ideas of romance are still largely supported by the film’s ending, despite her insisting otherwise in the narration. A better ending would be her hopeful of her future without the emphasis on romance as a driving force. The film wants to act like she’s making her own choices and Peter is this amazing supportive guy but, at the end of the day, it’s a cop-out romanticizing the notion of “the one” prevailing over everything else.

Also, the color grading in this is butt-ass ugly. No one looks good with that much saturation.