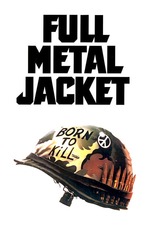 What was unsettling to me on this watch is that I couldn’t help but think that Gunnery Sgt. Hartman’s tactics were pretty darn effective, at least until they were very much not. If the goal of boot camp is, as Joker explicitly states, to make baby Marines into killers, Hartman’s unrelenting hardass routine is effective, if not straight-up required — and killers it certainly does produce.

But Joker also says in that same bit of narration that the Marines profess to want fighters who aren’t robots but autonomous warriors. Simultaneously, of course, the system in place, by design, limits the amount of autonomy any member can have. In an organization like a fighting force, this is necessary to ensure singularity of purpose. However, this contradiction, especially during what the editor freely admits is an “unpopular war,” ultimately causes deep rifts in the philosophical cohesion of said fighting force. The soldiers shouldn’t be robots, but they frequently are most effective playing one on TV — Animal Mother takes to protocol so fiercely that it is widely recognized will never be as actualized as when he has such a clear goal as killing the enemy amidst the shit and hand grenades.

What takes Full Metal Jacket to the next level as an artistic statement about the idea of molding men (gender neutral) though hardass tactics and devotion to protocol mediated through hierarchy is that, being a Kubrick flick, it constantly reminds the viewer (who cares about things like the identity and reputation of the director) that the infamously perfectionist auteur is running his film set Gunny-style behind the scenes in every frame. It’s interesting that R. Lee Ermey was one of the rare actors Kubrick let control his own dialogue and even improvise for Stan’s camera. But of course: he recognized a kindred spirit when he saw him.

Does Kubrick not treat his actors (including during the production of this very film) like they’re all Private Pyles? Do his methods, as grueling as they are for the actors (we love you, Shelley Duvall) to undergo, not bear fruit? It’s not really even just a Kubrick thing: in a film, the actors are professionals who make autonomous decisions as thespians, but ultimately their actions are subordinated to the director’s artistic vision. In the text and metatext, the individual is subsumed by the collective project at hand — but said project needs the individual (actor or soldier) to be able to act autonomously to bring it into existence. The individual and collective are not antonymic; rather, they form the dyad at the heart of all worthwhile human endeavors. Talk about the duality of man.