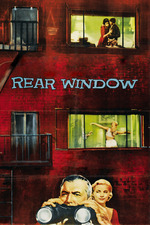 Fucking Masterpiece, one of the most well
Crafted films ever made, top tier Hitchcock, and that’s saying a lot, a master of his craft at work, the use of colour, the camera movements, the best exposition ever, The way it’s a romance disguised as a thriller, Jimmy Stewart’s performance is amazing, the jazziness feel to it is incredible, and the film holds up incredibly well, it doesn’t feel like the 50s, yet it is, it’s aged remarkably well, and I love how
We never leave the apartment, and we have a window to the outside world, instead of going there. This film inspired so many films I love such as Blue Velvet and Eyes Wide Shut