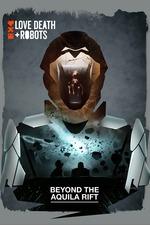 This episode is an adaption inspired by the 2016 short story collective novel by Alastair Reynolds. In this film you see a space ship crew get thrown off their trajectory, and come to realize they have traveled much further than anticipated, and have to battle between the smoke and mirror of reality and illusion.

Now there is a lot of questions that surround this film that have sparked many reddit debates on what actually happened. The beauty in this is that it’s all up to interpretation and we may never really know what’s “right”.

My personal take on Beyond the Aquila Rift is that the further and further into space that the crew goes, in reality, the harder and harder it is for them to wake up from the illusion of reality caused by their dreams. To me the scene in which Thom is the last to survive is what I believe to be the present of their point in travel. He is stuck in this abandoned parallel universe, that possibly emits toxic gases causing him to go in a trance that create a false reality, hence the reacquiring scene of him and his crew waking up to Greta.

I believe that when Suzy finally wakes up from her capsule, how Thom responds to this is the only way to stay in this dream, which in the end is the better option. By having her stay awake rather than be placed back into her capsule, would have stopped the possibility of Greta then later taking advantage of Thom. The only issue is that if Suzy remembered she dreamt about Greta being fake, the whole pattern would occur again.

This short is definitely a mind bender, but for very reason is why I enjoy it so much.