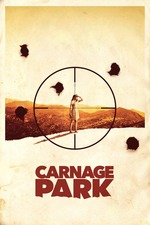 Carnage Park - a place full of crudely made stick crosses and bodies. In the words of Mickey Keating, a place resembling a nightmare - hell itself. A place where a woman, kidnapped during a bank robbery gone wrong, has to find her way out before an ex-sniper blows her head off.

Ashley Bell is the star of this film, although Pat Healy's Wyatt is very, very unsettling. Keating talked a lot about how My Bloody Valentine (1981) was a huge influence, and you can tell: Wyatt Moss wears a gas mask; a mine is at the center of its denouement. As someone who likes neither of the Valentine movies, I love what Keating did with his influences. He took the parts that mattered and formed them into something fast-paced, exciting, and brutal. This movie reminds me so much of The Texas Chain Saw Massacre and The Hills Have Eyes, but not because it's also set in the 1970s. It reminds me of it because of its unflinching portrayal of madness in the desert. If you're ever wondering of how to do horror homages, this is the film to look at.

I mentioned Ashley Bell earlier, and I just wanted to say that she is absolutely incredible. Her screams are frightened enough to put her in the top leagues of the original scream queens. Vivian is a fighter. She's ruthless when she has to be, but Bell prevents her from becoming a complete monster; she infuses her portrayal of Vivian with a sort of humanness that I don't know I've seen in recent years within the horror genre. Right after something horrific, Vivian realizes what she's done - what she's been forced to do - and you can see the terror of what she's becoming written all over her face and throughout her body language. Her performance is one that will be remembered, and Vivian will not be a character lost to the years. She'll be championed as one of the greatest final girls - mark my words.

Pat Healy's Wyatt is some other kind of monster. I have so many questions - what could make someone behave this way? The film is set in 1978, so it's possible that he's a Vietnam vet. Possible experimentation gone wrong? I don't know for sure, but just thinking about it makes me giddy. There's so much here! There's so much going for Wyatt! Keating wanted him to become something of a legend, and I believe he succeeded where (I believe) My Bloody Valentine failed. Wyatt Moss is scary. He's scary like the hill people in The Hills Have Eyes, he's scary like the family in Texas Chain Saw, and he's scary for the same reasons they are: we just can't understand this kind of madness. It's incomprehensible that someone (or several someones) could have so much malice and bloodlust in their hearts. For these very reasons, Wyatt Moss will be remembered among the best.

The technical aspects of this film are outstanding. The cinematography is something to be idolized; the direction is fantastic, the sound track is unsettlingly PERFECT. The editing is fast and smooth; a lot of the cuts are done in such a way that it feels like two characters are together when they're very, very far away from one another. There are people who champion Tarantino on his pseudo-westerns and stellar sound tracks, but I believe Keating's really come into his own here. He uses a very strange sounding set of songs, all sung in another language (that sounds Chinese or Japanese, but I honestly do not know). This could be a throwback to Wyatt's war years (possibly Korean? Vietnamese?). The warbling, with its 70s vibes, creates an upsetting ambiance all around Vivian. Along with that strange sound track, Keating has created some sounds of extremely slowed-down conversation. When Keating was asked what words were being said, he said, "I can't tell you." The atmosphere was troubling - I wanted it to stop the moment it began (which is a success for a horror film). It made me feel as if I was being watched and hunted like Vivian; it made me feel as if the theatre was a cage being looked upon rather than a place of mere observation. The sounds used put you into the film and increase your anxiety, much like Vivian's own terror and anxiety. Regardless of what it's actually saying (it could just be something hilarious that Pat Healy said, or continued to say), I believe that Keating has succeeded with creating a strange and upsetting vibe that will unsettle audiences for years to come.

Many movies have tried and failed to elicit a 70s feel, but this film is not one of them. Carnage Park is a success in every department. I'll definitely be buying this and rewatching it the moment that it's out on blu-ray, and I'll definitely be talking about it for months and months until everyone gets to see it. If you didn't like Pod, I believe you'll like this. If you're a fan of 70s slashers, you'll love this. If you're a fan of Hooper and Craven, you'll love this. My only complaint is that it's short; the ending is perfection, but the movie itself is just so short! I wanted more. But, had I been given more, I may have hated it. Perhaps the 84 minute run-time is just as it should be - no more, no less.

All in all, this was my favorite Sundance experience. It's an almost-perfect horror movie in every way, and I highly recommend it to any horror connoisseur. You won't regret it (and if you do, well then I'm sorry you have literally no concept of how horror movies work).