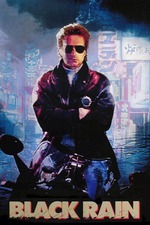 Black Rain has so much the same vibe as Blade Runner that I continuously had to remind myself that this one isn't actually cyberpunk. Even though this movie has an explicit setting in contemporary Japan and there is nothing fantastical about its plot, the international cast and multilingual cross-talk impart a feeling of cultural ambiguity similar to what Blade Runner and its followers often envision, and as Black Rain watches its mismatched protagonists drift further away from their moorings and into a lawless, sleepless underworld, even the most basic and realistic elements begin to melt away into the dreamworld of shady clubs and dark streets. The impenetrable city shadows and radiating batteries of neon facades are part of that same unreal shroud of speculative noir that makes such films so sumptuous. Even from the poster art, I believe I'm destined to look at Black Rain as the younger sibling of Blade Runner and a cool uncle to Ghost in the Shell, which is high praise for me - I'm excited to have another addition to this aesthetic family.

Unfortunately, Black Rain isn't half as intellectually engaging as Blade Runner, nor is Hans Zimmer's score as captivating as Vangelis's contender for the all-time top, and I often found myself thinking that if Michael Douglas could play this role so well, I can only imagine what kind of masterpiece Black Rain would be if the protagonist were played by Kurt Russell. Black Rain is just a movie about detectives chasing yakuza, which is fun and plays enough like a hypothetical Escape From Tokyo that I can't complain about its merits as an action movie, but there isn't much to be said about its worldview or philosophy. That's a disappointment considering its heritage. There is also too much time spent on unnecessary character-related hindrances that don't work out to be very compelling anyway - the opening scenes in New York dealing with Nick's background and troubles take away too much from the real heart of the film (the establishing shots) and I would much rather spend more time on the streets in silence than in the office with Nick, Charlie, and Masa arguing.

There's also the eternally dangerous question of how this American action film positions its American action protagonists in a foreign culture during the 1980s, which could lead to disaster even if all else ran smoothly, but I will credit Black Rain for playing the game a lot better than it could have. There are a few dull punchlines made of the cultural disunity (one beautifully countered by Ken Takakura's "I do speak fucking English"), but it seems to me that Black Rain is more conscientious than might be expected about examining how its brutish and unhinged American hero fits into a society vastly different from his own; part of the movie's focus is on how the traditional American way of doing things doesn't always get you what you want, and as often as we're meant to identify with Nick's confusion over Japanese society, we're meant to view him as the oafish intruder he is. While it's hard to escape the feeling that Black Rain's primary view of Japan is as "the place where stereos come from and people bow a lot," I think that the movie aims for more of a real exchange than a simple gag reel of cultural differences.

The biggest disappointments are in the lack of subtextual substance and the presence of extraneous scenes, thus causing the movie to run overlong without enough of that intoxicating atmosphere. Still, it looks gorgeous, and there are some really fun appearances in the cast - Al Leong makes his one billionth appearance as an evil henchman, Jun Kunimura slides into the background somewhere, and Professor Toru Tanaka muscles into a few scenes. Even Yuuya Uchida, founder/producer of Flower Travellin' Band, has a small role, which is probably the most exciting piece of trivia for me, although Lone Wolf and Cub star Tomisaburo Wakayama portraying crime boss Sugai comes second. This is also the first time I've seen Ken Takakura in an action-oriented role, and hopefully not the last. If not as often as Blade Runner (and nowhere near as often as Ghost in the Shell), I can see myself returning to this in the future for a fix of that same luxurious atmosphere.