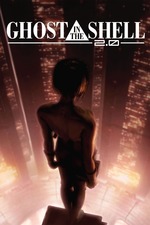 The original Ghost in the Shell is, to me, as flawless as a movie can get, especially visually - the greyness is luxurious and the radioactive green text rain is iconic. Every shot of the movie lives in my dreams. I feel that I should be incensed by this George Lucas-ized version, and yet I don't hate it. The severe and shadowy animation of the original Ghost in the Shell acknowledges the film's ancestry in some of Oshii's earlier works, namely the Patlabor films, Angel's Egg, and Urusei Yatsura 2: Beautiful Dreamer, and now this bulbous and blurry computer-generated replacement brings the film into line with Oshii's subsequent works, such as Ghost in the Shell: Innocence, Avalon, Garm Wars, and The Sky Crawlers, the last of which occasioned this rerelease of Ghost in the Shell for promotional reasons. While the CGI employed in those latter works of Oshii is certainly not the best-looking, I find the featureless oblongs and sepia-toned UV rays effectively surreal, somehow fitting for Oshii's storytelling even if they still resemble cutscenes from a PS1 game. Ghost in the Shell 2.0, therefore, feels very much like an Oshii film in spite of the change in its character, and I find myself intrigued by its possibilities.

I would never exchange it, of course. The corporeality of the original animation suits the mood of the environment, and although you could argue that replacing hand-drawn portions (and earlier 3D technology) with more recently developed computer animation ties into the themes of the film, I still find the story better represented by the beautiful presentation it was originally given. The worst aspect of this revamped version is not the visual or aesthetic quality of the recreated scenes, but that those scenes feel incongruous with the existing material. The much more obvious mesh of technologies and styles shifts the perspective on the film's ideas, and the novelty of the new scenes cheapens the existential gloom exuded by the original scenes; although Ghost in the Shell is a work of art, and one that should be celebrated, approaching it purely as a thing of aesthetic substance that can be whimsically transmuted does not do justice to its intellectual capacity, even if the characters themselves might argue that that mercurial transformation encapsulates the film's message. Jumping from old to new so many times within the film makes it feel too much like an event, like a side-by-side comparison for exhibition purposes, or like a suggestion that the original was in some way not adequate. With Oshii's late-emerging preference for orange-and-white color schemes over his earlier blue-and-grey taking over this film as well, there is a color contrast that furthers the disunity between the old and new pieces. What I would be interested in seeing is a complete remake of the film in this new style; I believe that it is primarily the inconsistency that sits uneasily with me, so replacing the entire film and not just a few elements of it might yield something more immersive. I imagine it would be, essentially, a vision of Ghost in the Shell produced in the manner of Innocence, and that would be something worth seeing.

The other new elements are less intrusive; the rerecorded audio track is largely indistinguishable from the original. Shigeru Chiba sounds a bit surlier than in his original performance (it was his slightly different delivery of "BAKAYARO!" that tipped me off, although something also seemed funny about the Major's "Ara, so?" in the opening scene) and Yoshiko Sakakibara (another frequent collaborator with Oshii) replaces the late Iemasa Kayumi as the Puppet Master, which creates a different dynamic between the Puppet Master and the Major. Because of how the environments have changed in the opening scene, now rendered entirely in 3D, something about the dialogue there doesn't sound quite right - as if it wasn't mixed to fit the newly designed space or something. The score also sounds ever so slightly flatter, a little less voluminous and mesmeric. Other than these points, however, the audio track retains the feeling of the original. There are also a few slight elisions, amounting to maybe a minute or two of footage - just slight trimming of certain scenes for reasons that I do not fully understand. Ghost in the Shell was already perfect even down to its length, and I can't say that cutting out such brief snippets impacts the film beyond disrupting the comfortable rhythm I'd already established after so many viewings.

Despite my misgivings about this arrangement, Ghost in the Shell 2.0 is far from the complete travesty I feared it might be - I put off watching it for several years because I had no drive to see a visually stunning move remade with different visuals, but now I'm more intrigued by the idea of having an altogether new Ghost in the Shell (that isn't the live-action one). I'd never recommend this over the original and I do think that it ultimately damages the effect of the scenes that are preserved just because of the contrast, but its major failing is in being a patchwork, not in merely having the aim to replace the original graphics.