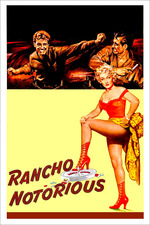 The opening scenes are brutal. Lang's cutting between the looks exchanged between the outlaw and our protagonist's fiancee, combined with note-perfect performances, is horribly effective.
"I don't know how to tell you this, but she wasn't spared anything". Ashen proclamation.
The way Lang conveys what is happening through a simple sequence of shots without showing us anything at all is savagely powerful. Incredibly precise acting and direction, presiding over an event that casts a pall over the rest of the film.

The difficult thing is to get a handle on the degree to which this same shadow remains cast over our protagonist, Haskell. Just how much does his quest for revenge mutate into something else? Into the simple life of an outlaw. He seems - seems - to forget about his desire for revenge for some stretches of time. Then it will come roaring back, most potently at the moment of final discovery of the identity of the perpetrator, in a possibly slightly over-acted but nevertheless vividly realised scene shared with Dietrich's marvellously named Altar Keane.

The need for retribution or some kind of justice was at times more immediate in my mind that it was readably in the character's. This was an interesting dynamic to have to tussle with. Clearly there's a theme going on here of how much in his quest for revenge, as the good man seeking justice, he in the end goes down a rabbit hole of violence from which he cannot return. Violence begets violence, law-breaking begets law-breaking, a never-ending cycle. A loss of identity, an identity consumed by violence that comes with the desire for revenge.

Lang constantly seems to underplay the revenge motif once Haskell has set out on his journey. You think there's going to be a reckoning in the bar ("I'm gonna kill you, Kinch"), but it doesn't materialise - interestingly in part due to Haskell seemingly attempting to hang on to some semblance of high-ground. It's an ongoing struggle, depicted with a frustrating lack of transparency - or a pleasing degree of complexity. Even in the final scenes, there is no triumphal act of catharsis to be had.

The film looks beautiful. Muted, deep technicolour landscapes; immaculately composed group shots; electric skies. The fight to the death in the barber shop is viscerally shot and performed. You really feel the blows. And then there's the song - of "hate, murder, and revenge!" - that runs through the film. Along with the slight feeling of non-simultaneity of emotion between audience and protagonist, the clearly fake painted backdrops (apparently a budgetary limitation, but I loved them) and the arch ballad present an inescapable element of artifice that further serves to keep you at an uncomfortable remove from Haskell's quest. You want to get more involved, but can't, and are just forced to watch as it all comes apart.

Die Hard: With a Vengeance