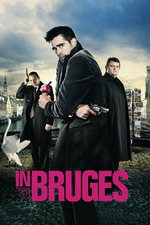 This right here is storytelling at its finest
On the surface, this is just a very funny, and very dark, tale about some hitmen. But on a deeper level, it delves into consequences and how people deal with grief, among many other themes that i’m too tired to write about
Colin Farrell was fantastic, but wow, Ralph Fiennes really was a different human entirely. I ate up every second of his character
And let me just say, the way Bruges is depicted in this film is very reminiscent of how Lady Bird’s nun says she writes about Sacramento
A clear appreciation of the city/culture was put into the script, and as much as Ray doesn’t want to be stuck there, it seems like McDonagh wouldn’t mind it all that much. I liked that