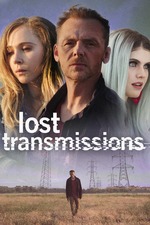 Similar to the title, somewhere hidden beneath the static and confusion of this film is something decent
Unfortunately, other than Simon Pegg giving an exceptional performance, this is rather mundane
Has some great things to say about how mental health is handled by the health system, as well as criticizing the music industry, yet either doesn’t justify its other options or doesn’t provide enough to justify inclusion
There’s much to desire from this, and what’s here is rather upsetting as I said, could have been a very solid film

A Kid from Coney Island