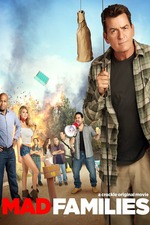 Crackle's latest film - a comedy about families of different races booking the same camp site for Independence Day weekend - could have been really fun entertainment, but it misses the mark.

The cast is amusing to watch. LilRel Howery, Clint Howard, and Finesse Mitchell are the standouts of the movie, bringing some funny moments. Charlie Sheen is...Charlie Sheen, though he does have a few good lines as well. Leah Remini is surprisingly underused; the few times she's on screen, she's usually standing by the sidelines talking about how dumb men are.

What really prevents this movie from achieving is the execution. As a writer, Fred Wolf has penned funny films (ex: Tommy Boy, Black Sheep, Dirty Work, Joe Dirt). I haven't seen his other efforts as a director, but his work here is surprisingly poor. While chunks of the dialogue in the script (written by Wolf and David Spade) amused me, the visual/slapstick set pieces fell flat. The directing lacked energy and despite some good scenery shots, contained some bad handheld camera work.*

Which leads me to the editing... it's pretty bad.

For example, there are moments in the film where a person is talking to someone, yet the editor decides to either:

A) Cut away from the person who is talking

B) Not cut to a shot of the people they're talking to!

Also for an 87-minute film, it's paced pretty slow.

In closing, Mad Families does have its share of laughs, but what should have been a fun and crazy movie (it seems to want to be an R-rated Grown Ups) ends up being a missed opportunity.

*I should also add that Fred Wolf is directing another comedy, an upcoming project called Drunk Parents, with the same editor and cinematographer from this movie. So much for improvement...