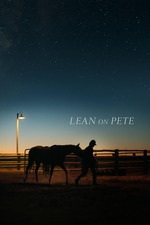 I liked Charlie Plummer's performance in All the Money in the World as John Paul Getty III, and since then I became interested in his upcoming roles. In Lean On Pete, Charlie Plummer proved to me that he is not just a good young actor, but he is a very talented, and promising, actor. His character is fully-developed, and there are some very powerful lines that helped to flesh out this character, therefore, it became a very interesting one. But Charlie's performance made his character, Charley, even more relatable. His face expressions and reactions are enough to express the character's mind, and even to state what his character is thinking about at this particular moment.

Travis Fimmel, as Charley's dad, gave an interesting performance. Also, Steve Buscemi and Steve Zahn were fantastic, and stole every scene they are in. There's only one character that hasn't much screen time, yet has a central role, that was really poorly written, and the actor who played it also wasn't good. So I was a bit disappointed to see that a character that seemed to have an important role in the story to end up to be nothing but stereotypical and thinly-written character.

The Cinematography is mesmerizing in this movie, and really fits the movie's haunting atmosphere. Definitely one of the best-looking movies in 2018, so far. Just behind Paddington 2.

The soundtrack also as functional as the cinematography, and the songs themselves are very touching and emotional.

Although it's one of the movie's virtues that it avoids melodrama clichés, I think the movie neither as harrowing enough as Good Time, nor as realistic enough as Manchester By the Sea to be as poignant, or moving, as it wanted to be.

Overall, Lean On Pete is a moving picaresque tale that avoids being very sentimental to evoke your feelings, instead, it relies on its three-dimensional protagonist that is anchored by Charlie Plummer's wonderful performance. Also, the plot unfolds in a way that you can never expect, you will really be shocked many times. Charley has no one to turn to. He's truly alone, hence, you will really care about him very much.