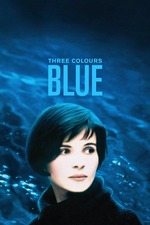 Blue is about liberty, grief and love but it is also intensely about music and creativity. Specifically it concerns Julie, whose husband – a famous conductor – and their young daughter, are killed in a car accident. The film sensitively portrays the bond that exists between music and emotion. Julie, in an outstanding performance by Juliette Binoche, keeps hearing snatches of music in her head or on the street, which flood her emotions and defy her attempts to escape her memories and reset her life. The use of cinematic ellipses draws us into the music, and then into Julie’s mind.

The film also uses music composition as the impetus for a creative urge that helps draw Julie back into the world. We see her slowly coming to terms with her new life, partly through the process of trying to complete the unfinished manuscript her husband left behind. The creation of the stirring music echoes Julie’s opening up to a wider range of feelings. The act of creation demonstrates that Julie is starting to reclaim her own identify and reconnect with the wider world.

The quality of Zbigniew Preisner’s score, with its powerful emotional cues, helps us empathise with Julie. There is a marvellous scene where she and her husband’s old colleague attempt to orchestrate parts of the manuscript. The shot is pulled increasingly out of focus and in its place we are guided to focus our hearing on the music that is taking place inside their heads.

This cinematic language and the rich ideas being explored come together in a stunning climax. The plot defers to an extended series of gentle ellipses and fades that drift across the main characters Julie has interacted with, each struggling in their own ways with what life has dealt them, before resting on Julie herself. She appears to have finally accepted that she is a person who can love again. The image making is sublime, but the music carries the scene with a clear message on two levels: firstly that to love is to be human; and secondly, to quote Hans Christian Anderson, that where words fail, music speaks.