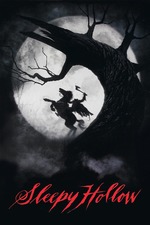 Originally the cinematic adaptation of Washington Irving's spooky 1820 short story 'The Legend of Sleepy Hollow' was intended in the early 90's to be a low budget slasher, accentuating the gore and scaling back the elegant, atmospheric horror Tim Burton brings to his version that ultimately came to fruition. Sleepy Hollow has that directors' signatures all over it - Gothic undertones, dark shadows & creepy woods, men of questionable moral fibre, the Danny Elfman score, Johnny Depp on leading man duties. It's Burton by numbers in many places, the kind of picture he can direct in his sleep, but he punches up a traditional old American ghost story into a rather macabre, often vivid if a touch forgettable piece of traditional action horror. It won't exactly leave a chill down your spine--it's too over the top and punctuated by moments of foppish campiness for that--but thanks to a strong cast and some well executed sequences, it manages to entertain.

If it's Burton by numbers then really it's also Depp by numbers, with the actor happily stepping into the shoes of Ichabod Crane, reimagined as an exiled New York detective much too concerned with forensic understanding of crime for the putative police force (led by grandmaster Christopher Lee in an enjoyable cameo) to be comfortable with, so he's packed off to Tarry Town in the creepy glen of Sleepy Hollow to investigate a series of deaths by decapitation. Like in many Burton films, Depp does not play your traditional leading man; Ichabod is careful and effete, more likely to faint at the sight of Christopher Walken's grizzled Headless Horseman than challenge him to a duel, and he shares some DNA with Conan Doyle's Sherlock Holmes, as does Burton's story itself. Ichabod has a range of suspects for the murders in the sleepy town, all of them handily a measure of respected English & American character actors (Michael Gambon, Richard Griffiths, Jeffrey Jones), and attempts to quantify what they all consider to be a demonic presence from a scientific perspective. Burton ultimately gives way on that so he can amp up the action and the horror in the second half - lopping heads off with abandon, the Horseman is primal and well realised, while Burton doesn't spare the claret in plenty of places. His horror always feels heightened however, spectral and operatic, to the point you'll be less terrified and more repulsed or entertained, and he often punctuates such moments with beats of light comedy to counterweight the terror. It all trucks along at a decent rattle, only slowing to explore the rather flat dynamic between Ichabod & Christina Ricci's Katrina, and though the climax is well staged & exciting, it suffers from 'bad guy explains the plot' syndrome.

In truth, the only genuinely memorable element to Sleepy Hollow is the production design, because the sets Tim Burton created at Leavesden Studios are quite fabulous; Gothic, creepy and haunting, they bring remote 18th century America delightfully to life and allow the action and the supernatural nature of the story to be dripped nicely in atmosphere. Johnny Depp is decent enough, even if he's not being remotely challenged, and he's surrounded by solid actors who do what they can with a decent, if unmemorable script. Burton's hit & miss career would rank this roughly in the middle - nowhere near his worst efforts, but unable to punch through into the stratosphere of his classics.

A. J. liked these reviews

A. J. is using Letterboxd to share film reviews and lists with friends. Join here.