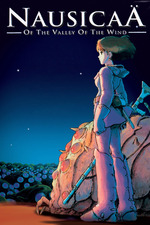 My 15th Studio Ghibli film and the studio still has more wonders to offer, I don’t think I’ve ever seen such consistency anywhere, maybe in the filmography of Stanley Kubrick whom after his first couple of films which aren’t acclaimed, went on to make masterpiece after masterpiece, but even so Studio Ghibli didn’t have those first couple of ok films, this in fact was their first film, though officially Castle in the Sky (1986) which released 2 years later is their first film, this was made by the same people and crew and when you watch it now you’ll see the Ghibli “Totoro” logo they I assume that was made later on since obviously My Neighbor Totoro wasn’t made until 1988, but the point is that the people at Studio Ghibli consider this a Ghibli film and so do I and pretty much everyone else I’ve spoken to. So imagine making a superb film first time out, now this wasn’t Miyazaki’s feature film debut or anything, he made The Castle of Cagliostro in 1979, I still need to crick that out, but that wasn’t a part of Ghibli, so sure the people had some experience but I would assume a sort of more group oriented project like this would be quite foreign to them and it’s amazing that they managed not only to make a good film but to make a 5 star film. My least favorite out of the 15 I’ve seen has been really good (74/100) and everything above that has been great to masterpiece-level. They’re in fact still going strong, there last couple of films “When Marnie Was There” (2014) was a great film and “The Tale of the Princess Kaguya” (2013) was a wonderful last masterpiece by the late Isao Takahata.

Having seen 14 other films before exploring the roots of Studio Ghibli I was primed to certain types of films, and was shocked to see that Ghibli had began with full on science-fiction, it was a pleasant surprise. It’s always great to see something different and unique and Ghibli seem to always be able to deliver that. I loved nearly everything about this film but what stood out the most to me was the world Miyazaki and the rest of the crew had created. The visuals first of all where excellent in typical Ghibli fashion, but they look very different to what I’d typically think of when thinking of a film from this studio, of course the characters look similar and whatnot but this being a futuristic world, everything seems very different, casting us into a completely different universe. The score as well adds to this, a wonderful sci-fi score plays in this film and right at the start the barren and harsh feeling of the world is conveyed through the score. There are all manner of creatures and whatnot around and you really feel like this is a living and breathing world with so much more than what we see on screen and that’s how they immerse us into these films, truly great world-building.

Nausicaä is probably my favorite Ghibli protagonist, she’s just so fucking cool and bad ass. I haven’t disliked any of the protagonists from the other films but for the most part they’re usually teenage girls with black hair who are shy and not good around others and whatnot, nice to see something completely adverse.

This film was entertaining throughout and again I’d like to mention how well Studio Ghibli are able to animate explosions in particular, they really look stunning in both a WOW way and they manage to show off the devastation that such weaponry can cause. But moving into the final act everything culminates in such an epic and grand finale that will surely blow the mind’s of any who aren’t initiated. Visually stunning with a beautiful score in the background, it’s big and exciting and tense and emotional. What an amazing film this is! Thank you Miyazaki and everyone at Studio Ghibli for allowing me to have such wonderful experiences.

🔙 The Skeleton Dance
🔜 The Sprinkler Sprinkled