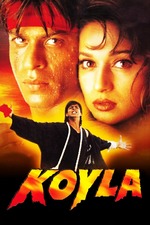 This one has a pretty low average user score, because it's insane and some people want sane movies, because it's in part violent and bloody, which turns some viewers of these song and dance romances off, and, I assume, because the villains are rapey to a degree that probably make people uncomfortable.

But for anyone who wants their emotionally violent and surprisingly horny 90s-posing-as-80s melodrama drenched in a feeling of psychosis this movie is a treasure. It starts running and relentlessly pummels the viewer with insanity after insanity, from female protagonist Madhuri Dixit introduced when she together with a group of children steals candy laced with cannabis and perform the first dance number as a stoner comedy, to male protagonist Shah Rukh Khan playing a mute, forcing him to act out his messages in charades even during times of great emotional stress and heightened drama, and of course villain Amrish Puri just being himself, slapping his brother in public for feeling up the miner's daughter and then, while proclaiming himself God, driving a sword through the miner, because his daughter caused him to slap his brother.

Some people call this "so bad it's good". Don't listen to them, it's not bad. It's so deliciously out of its mind that it's good.

As usual it's a melodrama, it's an action film, it's a low-brow comedy, it's a musical, of course, and it even has an unusually strong otherworldly fairy tale vibe. It's filled to the brim with leering villains and pure-as-snow heroes, with Khan disappearing up a tree to play his mute nature-boy flute every chance he gets.

The comedy is usually a bit of an issue for me, distracting from the rest of the drama and intrigue, but here it feels integrated, and played with a similar degree of insanity, and manages mostly to be enjoyable as part of the whole. It could actually be the first time I've repeatedly laughed out loud at Bollywood comedy, because "what the fuck?"

My DVD sabotaged the experience a bit by being non-anamorphic, by not subtitling the songs, by being pretty lax with the subtitle timing, by flashing big ugly pixelated watermarks during the song numbers, and it also had some strange soundtrack cut-outs. It had some letterboxing, but was still cropped down from an even wider image, as evidenced by the censor license and some weirdly cropped scenes. But what can you do, I still enjoyed it immensely. Now to find a better DVD of it.