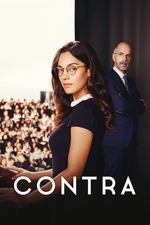 Like so many of these centrist "can't we all just be civil in our totally good-faith disagreements?" movies, Contra thinks it's being progressive by acknowledging the existence of racism (in the most basic possible way, like countering islamophobia with Bible quotes) while giving a nod and a wink to the kinds of insulting jokes that Dieter Nuhr et al. are rightfully getting called out for. In keeping with the film's central rhetorical figure, it's textbook apophasis – making the racist joke by saying it's not making it.

Yes, the movie has a point beyond that, and I will say that it at least clears the very low bar of realising that in the arena of "cancel culture" or "political correctness" or whatever you want to call it, it's usually the ones calling out the abuse who have the most to lose, not the so-called "victims." But then it still goes ahead and both-sides the issue by making weird gestures towards "free speech" and concluding by basically saying, "this is not about an isolated incident, this is about a pattern of abuse, but also this guy was really nice to me and he could be nice to other people in the future, think about it."

The sad thing is that they almost make it work at times, mostly because Christoph Maria Herbst is just so good at playing the engaging asshole with a bruised heart of gold.

There Is No Evil