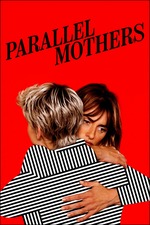 An emotionally controlled, gorgeously constructed melodrama about women's lives, motherhood, memory, and the way history, both large and infinitesimally small, echoes down through the generations, touching even those whose lives are at first glance entirely removed from the originary trauma.

It's hugely impressive, and ultimately quite devastating too, how Almodóvar flips the traditional dynamic, opting not to use the grand historical narrative as a means of telling an intimate and individualised story, but the other way around: here, we get to know the protagonists and their, by the standards of melodrama at least, workaday struggles before we can truly grasp the specific relevance of the historical massacre spoken of in the opening sequence. Almodóvar makes sure we know the characters as people – as women, as mothers, as daughters, as lovers, as economic subjects, as individuals following their dreams – before he trusts us to also understand them as at times unwitting carriers of historical memory.

I will definitely have to watch this again to grasp it in its full thematic and emotional complexity, but there is no doubt in my mind that it's a major work. 82 years out from the Spanish Civil War, 46 from Franco's death, Almodóvar asks some uncomfortable but pressingly essential questions about the future of post-fascist Spain and its apparent structural reluctance to confront its own historical demons ("Cero euros a la Memoria").

"I remember because my mother told me."