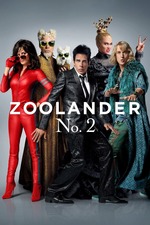 If this weren't a sequel, I'm sure it would flop; and if I weren't on a date, I probably would never have seen this.

The film will play on your nostalgia of Zoolander 1, and in my opinion, comedy has kind of grown since then, no? Saying that, it didn't stop me having a few laughs, in particular Zoolander's reluctance to get Facebook.

I'd say it's for the fans of the first film, and if you were to go into this not having seen Zoolander 1, you'd probably be a little bit disappointed.

There isn't much to say about it, it's exactly what everyone's expecting it to be. I did, however, like it's brief social commentary on gender roles and gender fluidity, and I don't think it's anything for activists to get up in arms about - it's definitely not mean spirited. I also find the theme of the film about Derek and Hansel's relevance a tad ironic given that I don't believe Zoolander is really relevant anymore.

I didn't hate it, and some of it was actually kinda fun.