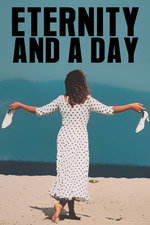 Alexandros is just gone. Maybe not physically yet, but spiritually certainly. He has no wife, no house, his relationship with his daughter is almost none and while he used to be one of the greatest poets, for the last years he has been working on an old incomplete poem of another poet. He just ain't like he used to be. He used to have a flame, write and write and now not only does he not have any ideas of his own, but he can't even continue something he ain't his. He has lost any kind of inspiration.

He is living his last few days alone, thinking about his past. What he has done wrong, what he should have done better or completely differently. And then an opportunity comes. He starts thinking that if he helps one kid, he will help much more. He will help the kid's family, even the whole world in general, the community. But most of all he will help his own self.

In his own mind, by helping this one kid, he will do right, for anything he has done wrong in his whole life. So he starts kinda helping him. But in reality he is trying to get rid of the kid and say he can't do anything else. Slowly he realizes that he can and should and must do more. Because the kid has his whole life in front of him. He only has a day. So yeah he helps him.

They go through a lot. A lot of trouble and a lot of people. They see kids that have climbed fences. These kids are trying to reach to the other side, but they can't. Because those stupid fences are there. Fences that ain't there by nature. Fences people have put. And these people who put those fences there, stop these kids from going somewhere else, doing something else, being something else.

And just when he starts facing everything a bit more bravely, the voices become more and more far away. And he starts having second toughs. He needs one more day. He needs tomorrow. But what is tomorrow??

How to Make Movies