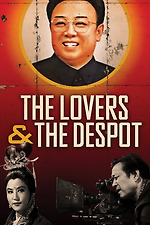 A fascinating and terrifying documentary about one of South Korea's most respected filmmakers, Shin Sang-ok, and its most popular actress, Choi Eun-hee, who were abducted by North Korean agents in the late 70s. They are held for years and eventually forced to make films for Kim Jong-il, who uses the famous couple as propagandistic tools. During their time working for him they were able to secretly record conversations with Kim Jong-il and smuggle out the tapes, and these audio recordings are combined with interviews (primarily with Choi Eun-her so she can tell her own story) and stock footage of Shin's films to present a complex, seemingly unreal true story.

It falls into various documentary tropes, but the content and interviews are strong enough that I was totally absorbed, and impressed with how difficult the film must have been to make due to the mysteries surrounding North Korea. Would love to see a Korean director make a narrative film about this.

Would also love to see some of Shin's films but I'm having trouble finding release info (please help me out if you know anything about their availability in the US).