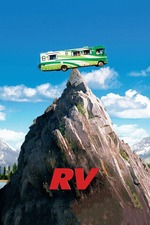 RV is a bad movie. It stars Robin Williams (and I feel sorry for the late actor as he is a good actor and deserves better). This movie is poorly written and the jokes, don't get me started on the jokes. They spent what felt like 10 minutes on ONE poop joke. In the end, the joke wasn't even funny and got a cheap laugh from people who laugh at gross-out humour. The main family are self-aware as they know that they aren't nice people, but it takes them to the last FIFTEEN minutes of this boring generic family "comedy" for them to change as people and become nicer. There is a B-Plot in this movie where a family, that the main characters met on their first night of the trip, are trying to find Bob and Co. and return a laptop. This B-Plot isn't that interesting but at least it was more enjoyable then what happened with the main family. The second family were nice but the main family wanted nothing to do with them as they were a bit weird. A lesson that took majority of the movie for Bob and his family to realise is 'Never Judge a Book by Its Cover'. I just finished watching this movie and all the names I remembered are Bob, Todd, Larry and Garry. I might be incorrect but the names but that shows how forgettable this movie was.
You're probably wondering "You're bashing this movie so much, why did you give it 2 stars and not lower?", well, I give it 2 stars for 2 middle fingers up.

Edit: This is a half-star film.