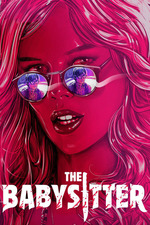 The Babysitter is a part of the few Netflix Original Movies that I liked. This is a good, fun horror film with plenty of great gore but it's not without its flaws. Firstly, how smart and nerdy Cole is, he's just a normal teenager in a horror movie. What I mean by that is he NEVER decides to run away when he sees an opportunity. Secondly, some shots, even though they cool and got the viewer more into Cole's shoes, go on forever. An example of this is when his parents leave for the weekend. This entire scene is one take in first-person perspective. It was good at the beginning but the scene went on and on and they didn't go to a different shot. That's where the flaws of this movie end for me. I had a lot of fun with this movie. I didn't expect it to be as gory as it was, but I'm happy anyways. This was the best movie that I've seen directed by McG. I've only seen two others, Charlie's Angels and Charlie's Angels: Full Throttle. Both not really good movies and that's why I was probably supposed that this was a good movie. This movie was surprisingly funnier then I thought it would have been. That doesn't mean it's a comedy or anything. It's just got a few jokes scattered throughout the movie. I remember when watching I had thought to myself "Man, this movie is similar to Better Watch Out", and it wasn't until the third-act where this movie was really similar to Better Watch Out. Both movies literally have the exact same shot. I highly recommend watching this movie if you're into horror. Poor Samuel, he didn't want to be apart something big than himself. Also, I didn't realise I watched this movie one year after its release.