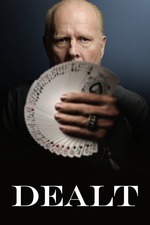 Dealt manages to be one the best documentary films that I have seen in quite some time. If you break it down, it is about a man who triumphed over his disability to do something quite remarkable. The film follows illusionist Richard Turner, a blind so called Card Mechanic, a man who is skilled at manipulating a deck of cards. This is a terrific film that features interviews with Turner, his family and those who know him. Very well done, insightful and uplifting, this is a well crafted documentary that is very entertaining and quite uplifting to see a man overcome his disability and accomplish so much. Richard Turner is such an impressive person and this is a film that goes in depth about who he is. An engaging film from the start, Richard Turner shows how he was determined to not let his limitations get the best of him, and we see him accomplish something quite incredible. His tricks are terrific and what he has accomplished in his personal life is quite incredible as well. He doesn’t let his blindness affect his way of life, and in the end that’s really the theme of the documentary, or the message so to speak. Not letting your limitations get the best of you.