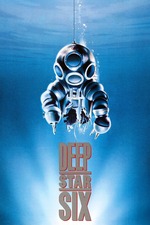 In the late 80's after the release of James Cameron's The Abyss, studios seemed to want to cash in on the success of that film by creating a few rip offs with a horror twist. Friday the 13th director Sean S. Cunningham directs this science fiction horror monster film that doesn't offer anything new or original, but is nonetheless a fun, entertaining film for the B movie fan. The film has questionable acting and cheesy dialogue, but for the most part it is a fun film that entertaining. DeepStar Six is not the best film that Sean S. Cunningham has directed, however it works well enough to a fun, mindless ride if you can forget the fact that it rips off The Abyss and Alien. Don't expect anything great with this one. However the film isn't as bad as what the reviews have said and it is a bit underrated. I've always found Cunningham's work after Friday the 13th to be average, and DeepStar Six is most certainly that. This is not a memorable film like the classic Slasher film. Enjoyable with all its flaws, this is a film that like Leviathan is overlooked due to the fact that it's nothing original. Having said that, it's not that bad, in fact it's good for what it is, and in the end it's a film not to take too seriously. Having said that, go into this one expecting a cheesy, tongue in cheek good time and just have a mindless, entertaining evening of watching an obscured cult gem of late 80's horror cinema.