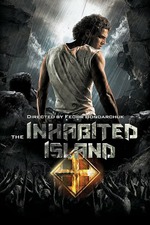 I have to say I’m quite the sucker for a Byodor Bondorchuk film, as I find his films to be quite eccentric, off the cuff thrill rides that burst with kinetic energy that is quite chaotic and in that regard his films are something quite unique and bold in its style and execution. This is an entertaining film that has interesting ideas to its story with good acting and direction. The Inhabited Island is a fun film that boasts some impressive visuals and a good story. The film mindless action is the key aspect of the film and despite a few lumbering moments, this is the type of film that is fun, entertaining and is much better than what you might think. Bonderchuk's work is not for everyone, granted, but if you enjoy action film with a different twist, then this might be up your alley. The film has plenty of twists and turns to hold your interest right up till the credits and it is a film that has an art house feel to it with an interesting mix of ideas to its story.

For what it accomplishes The Inhabited Island is an engaging film going experience from start to finish and it has something for those that want an eccentric action picture that is designed to be quite thrilling and above all, quite something worth a look, especially if your familiar with this director. Bondorchuk isn't a master of cinema, but he sure can make a fun film and that is the case with The Inhabited Island. With a good script, decent cast and good action, this film manages to stand out among his other works, but at the same time, this one like his others feels quite experimental in how he accomplishes its action and overall ideas to convey them on celluloid in a way that is quite special. A good film, that is a bit underrated.