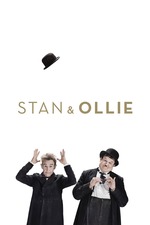 Laurel and Hardy were kind of a big deal in my house growing up. Their unique brand of slapstick humour and witty dialogue was guaranteed to have the whole family laughing. Even then, so many years after their final film, the impact was felt. I honestly don't know, gun to my head, if I could pick a funnier and more impactful comedy double act.

From struggling to walk through doors to simply mispronouncing common phrases or getting muddled up by language, the genius of the pair lay with their relationship. We, as an audience, sense that somehow they really are "two peas in a poddd" (that's not a typeo) and they will always be together.

Truth be told I never gave much thought to the duo's lives outside of the screen. I knew that Stan was the one who drafted and created most of the routines while Ollie would kind of just show up and perform. I knew they fell off the map somewhat when a contract dispute arise with Hal Roach.

But I was never that interested in it, either. For me, the discovery that someone who brings you so much joy is actually a depressed or miserable soul isn't something that I hope to do. Robin Williams is hard enough at this point.

So I kind of just ignored the real world, content to just sit back with my boxset and watch two comedic geniuses at work, baffled by the fact that the rest of the world seemed to have forgotten their brilliance, instead talking about Chaplin, Lloyd and Keaton's brilliant entries into cinema but bypassing the, as far I'm aware, only comedians who manages to make the jump successfully from silent to talkies, and remain inventive and funny even to this day.

All of which is a roundabout way of me explaining that when the movie Stan & Ollie was announced I felt a prickly sense of discomfort. I'm not entirely sure how I feel about this one, given just how much of an influence their work has had on me.

On the one hand, as I've already said, I don't really want to know that they were misersble or that they hated each other or something, but at the same time... hey! Anything that might get modern audiences to become interested in two of the greatest showmen of all time can't be a bad thing, right?

It's with a big smile and great pleasure then, that I can safely say Stan and Ollie is a hit, with me at least. Rather than hone in on any sense of bitterness or rivalry between the two the film instead opts to simply be a story about friends becoming better friends. Obviously we have a brief moment of animosity between the two, but it's never a friendship breaking moment. Instead we get a touching portrayal of two best friends slowly realising that that's what they are.

The film's all the better for it too. Rather than falling into the well worn tropes of a biopic it manages to maintain a uniqueness all to itself. As much a comedy as it is a drama, the heartwarming moments hit as hard as the funny ones do.

So much has already been said about Coogan and Reilly that I'm entirely sure what else I can add. Suffice it to say then that their performances are among some of the most incredible I have ever seen. Not so much an impression of the pair (which was a concern) as it is a total embodiment of them. Their look, their voice, their mannerisms, their rapport... It's incredible, and those award noms are all well and truly earned on those basis alone.

But it goes so much further than that. Unlike Rami Malick in last year's Bohemian Rhapsody, who's performance echoes Mercury but never quite felt like anything more than a really good impersonation, Coogan and Reilly find the characters within. It's key that the film is called Stan and Ollie and not Laurel and Hardy, as this is a story about the men as much as it is the double act.

My real enjoyment, however, came from the routines. Coogan and Reilly get the opportunity to enact several of the more famous routines the pair are known for and they do it brilliantly. I couldn't help but sit there with a massive grin on my face, totally in love with the care and adoration with which these moments are realised on screen. What's more the audience were in fits of laughter themselves, proving that Laurel and Hardy remain as funny now as they ever were. Truly timeless in their brilliance.

And I haven't even mentioned the wives! Hilarious in their own right, their snappy comebacks and somewhat shared dislike of each other is like icing on an already very tasty cake. Everytime they appear on screen the movie is somehow elevated, which is saying a lot since it didn't need elevating in the first place. And as they each vie for the head role, desperately trying to do what's best for their husbands while ignoring the wants and needs of the other, a lot of dramatic and comedic ground is coveted between the two. But deep down they care for each other much in the same way the male leads do, and the film offers two double acts for the price of one, as one character points out early on.

There's obviously a lot of love for the original Laurel and Hardy films coming from behind the camera as well. The film is littered with nods and winks to their work. Not just within the reenactments but subtle lines of dialogue or body movements. One scene sees then attempting to carry a heavy case up some stairs and... well, you get where this is going.

The brilliance of the movie lay within it's ability to always keep proceedings fun. Even when the heartfelt moments come, and emotions do bubble to the surface, it never looses sense of itself. A dramedy more than anything else, and one that refuses to be bound by the rules of the "weepy".

I came out loving the duo even more than I already did, and I now feel an overwhelming urge to rewatch all of their films and laugh. I encourage others to do the same.

Whether you're a fan of Laurel and Hardy, Coogan and Reilly, or you just really enjoy biopics, comedies or dramas, this is a high bar for the rest of 2019 to beat, and I strongly recommend you take the time to go and see it.