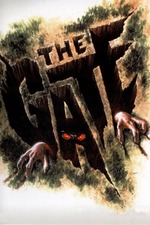 I've tried watching The Gate several times, and everytime I wind up either falling asleep or having to shoot off to do something else. For some reason I could never quite manage to watch all of it. And it wasn't a film I was so interested in that I made a big effort to continue on with it once I'd stopped.

That was a mistake.

If I'd seen this movie when I was a kid it would have been one of my favourites. Playing out like a cross between The Goonies, Gremlins and a nastier version of Poltergiest this Canadian made horror is a riot. It's stupid as hell, but then... I've always sort of enjoyed movies that don't take themselves too seriously.

It's just a lot of fun. Telling the story of a young boy, Glen, who discovers the portal to demon dimension in his back garden, it's a movie that pretty much takes it's concept and runs with it.

There's some fab practical effects, humour, some gory sequences and the kind of acting only cheesy 80s horror movies are allowed to get away with. Between the likeable characters, inventive horror and high concept plot there's a lot to love about The Gate.

It's low budget, and a little rough around the edges, but then that's kind of all part of its charm. If you, like me, love this kind of silly yet inventive horror then you're going to have a blast. It deserves a far bigger audience.