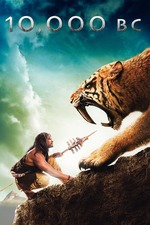 "Do not eat me when I save your life"

There's many thing wrong with 10,000 BC; the plot, the acting, the writing, the CGI, the fact that it has the misfortune of being a Roland Emmerich film. However, those pale into comparison to what I believe to be its greatest sin, it doesn't even understand its own content. This is most likely because Emmerich is a director that can't do subtlety, he can't give a film flourishes that may seem small and rather inconsequential but when placed within the large context of the film, they add so much. I think the best way to go about this is to go about comparing it to another film about a tribe that came out two years prior, Mel Gibson's Apocalypto.

What makes Apocalypto work so well is the understanding of the content. Given that it is set in the pre-Columbian era (around the year 1511 according to the Wikipedia page) and focuses on a Mayan civilisation, it would only stand to reason that the characters in the wouldn't speak English, and they don't. Gibson made it so that the tribes people spoke a different language (most likely their own special one, I'm not entirely sure) and that gave legitimacy to the setting. Given that 10,000 BC is set in, you know, 10,000 BC, it makes no sense as to why the characters would be speaking English. It may seem like a small complaint but it's one that ruins the rest of the film.

Oh and also, the cavemen find people building pyramids which either means Emmerich did zero research before filming this as the first Pyramids were built from 2630 BC to 2611 BC or I had a stroke induced by the eye burningly awful CGI which caused me to miss as section where the characters time travel. Either way it's dumb as fuck and makes about as much sense as the why our pal Roland has still got a career to this day and why he was given a career in the first place.

Watched as part of the Shitember season. Check out the entire season here

The Pit, the Pendulum and Hope