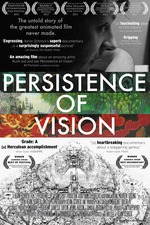 Now before I get into the meat of it, I want to say that this documentary was not well made, which is why I gave it a 6/10. Most of it is incomplete footage of The Thief and the Cobbler spliced in with people talking, the audio mixing is terrible and I had to adjust my volume constantly, and the parts that were focused on sometimes feel a bit arbitrary. It was mediocre documentary
That being said, I think anyone interested in art, and especially anyone interested in being an "auteur," should watch this at least once
Richard Williams was a masterful animator. He's one of the few people working in the medium who I could call a genius, and he's made countless contributions to it, not the least of which include his book (which is great!). That being said, though, he was not a director, and this documentary goes to great lengths to show that

Despite the tragedy of the situation, I do firmly believe that The Thief and the Cobbler was never going to be a good movie, even if Williams was allowed to finish it. Ironically, all of the things that made him such a great animator were the things that prevented him from ever seeing his project finished; he was a notorious perfectionist, he was completely unwilling to cut any corners or do things the easy way, and he was constantly adding or changing things, storyboarding the end of the film near months before it was supposed to be completed and constantly extending scenes out to several times their length
And, well, there's a reason we don't get films as meticulously crafted as The Thief and the Cobbler. And it's not just capitalism
It's easy to blame greedy studio heads for taking an artsy masterpiece and ruining it. And admittedly, they didn't need to do that to the movie. The saddest part of this documentary was when the trailer for the retooled Arabian Knight was played in its entirety. A master artist's work was torn away from him and turned into the one thing he feared it becoming the most: a commercial
But that being said, the studio was not completely wrong. Williams promised a movie in three years, which is much longer than most movies take to make, and he didn't deliver. It's unfair that he couldn't have more time, but he knew that he was working with a studio from the moment he signed the contract, and yet he still chose to let the runtime creep upwards. He chose to spend time on pointless indulgences, and push his animators to work 60 hour weeks, and to wait until the last minute to storyboard the end of the movie. And Warner Bros simply followed through on their end of the deal
Williams's hubris can be hard to watch unfold, and as misguided as he was, it's hard not to feel for him. Any artist can relate to the desire to create something incredible, and Williams had that desire carry him through over 20 years of production. But his mastery was his greatest downfall, and the movie is no longer his
And now we'll never know how the story ends. Would Williams have ever truly been able to finish the film? Would he have met the deadline if he had let a few scenes be animated on twos, or cut down a few scenes that were dragging for over a minute, or be willing to look at something that wasn't entirely to his satisfaction and go "well, it's good enough," or do anything at all to compromise even a little? I think the fact that we'll never know speaks volumes more than any answer I could give
To be a great director, one needs to be a lot of things. Visionary, sure. Talented, absolutely. But one also needs to be pragmatic, and resourceful, and willing to cut corners and take the easy way sometimes. Otherwise, a film would never get made
Richard Williams was definitely a talented visionary, but he wasn't a good director. As artists, filmmakers, animators, writers, we all owe it to ourselves to learn from him. Both from his work, and what made it truly amazing, and from his decisions. If we stand any chance of making our dreams and our ambitions come true, we need to understand compromise. And as much of a genius as he was, Williams never did