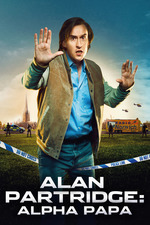 There's no denying that Alan Partridge is a national treasure. I've loved the character for many years and almost all of his material is brilliant. Steve Coogan is a comedic genius and he was long overdue for a movie adaptation of Alan Partridge. What I don't understand is why they would settle with the plot they did. It's very twisted and it seems incredibly unbelievable. The plot involves The radio station shutting down and becoming more up to date with modern audiences. As a result of this Patridge recommends Pat Farell "Colm Meaney" should be made redundant instead of himself. Pat then gets mad and takes people hostage, with a gun to their heads while trying to broadcast his radio show.
The film only came out in 2013 but there's absolutely no way this plot would be greenlit in 2021, after watching the film you can see why.

However the film is very funny, not the funniest film ever but Partridge fans will not be disappointed. The highlights of the film are almost identical to the highlights of his original show, the two greatest things in both the original show and the film are Alan himself and Michael the geordie. Michael provides so many laughs, his accent isn't as thick or even as strong as it once was but he is still very funny. Simon Greenall is always a great on screen presence and it was great to see him reprise his role of Michael.

In comparison to most movies adapted from shows, particularly British ones, (Absolutely Fabulous, The Thick Of It, The Harry Hill Movie) This is a strong film. I can't say it's anything special though, because film adaptations of comedic characters is done all the time. I can say the film is unique and worth a watch if you are fan, if your not a fan you may find it stupid.