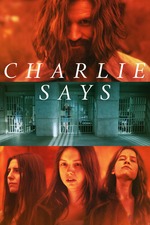 Mom, I need you to stop loving me. You're never going to see me again.

This movie is a potentially controversial take on the Charles Manson murders. It follows three of his followers: Leslie, Patricia, and Susan, who became incarcerated after committing heinous acts. In the beginning, it shows them as laughing hyenas in a prison cell, practically unable to decipher reality from fiction.

One pivotal moment included Charles ("Charlie" as everyone in the film called him) performing one of his songs for Terry Melcher, a record producer.

Some stabbing and suffocation is shown and there are dead bodies on the lawn. However, only two of the actual five victims were murdered onscreen.

The movie focuses mostly on cult member, Leslie Van Houten. Hannah Murray, the actress who portrays her, looks like a cross between Liv Tyler and Drew Barrymore; she carries the film exceptionally well. Charles Manson's madness is revealed through his lies, contradictions, manipulation, misogyny, racism, and physical abuse. The film portrays these women in his inner circle as victims. Some of them had more of a role in the killings than others. The most sympathetic is Leslie; the film makes a strong case that she should be released. However, it is not clear cut as all that and some people will still want the women that are still living to serve out their life sentence.

By the end, the film built up to the point where it had an emotional impact for me personally. In any case, it was a fresh take on the Manson murders.

Vegan alert:
Charles Manson dresses in a deerskin outfit (while proclaiming to the girls that they shouldn't eat meat).