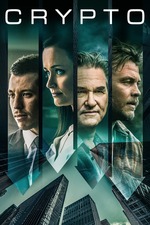 Tonight, I saw a sneak peek of Crypto.. It centers on Martin Duran (Beau Knapp), a New York banker who is exiled to his hometown of Elba. The first act was caught up in explaining banking practices as if we needed to make sure the audience knew that the writers knew what they were talking about. Unnecessary and boring.

As the story unveiled, it got interesting. Some of the editing let us know what was going to happen ahead of time, but once again it was unnecessary and minimized the effect of some of the reveals.

The main draw would be the solid cast with some decent names. I mean, Kurt Russell? Count me in. Also, Luke Hemsworth revealed in the Q&A that the movie was about potatoes... Don't worry. He was totally joking.

Perhaps the movie should have been called Cryptocurrency as Crypto isn't as specific. But once it starts getting into the cryptocurrency instead of relying on banking jargon, things start to get interesting.

Some sloppy things: Martin Duran receives an email to "Martin Durant" so not everything is consistent when they are trying to establish who he is.

Vegan alert:
The exterior of a steakhouse is shown.