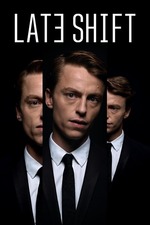 I was on the fence about seeing this film, but then I decided what the heck and went to the Los Angeles Times Festival of Books this year. The Festival of Books used to have a great film program, but now they've cut it down severely. In fact, I'm not even sure they showed any films last year.

This year, this sole film that showed was an "interactive" experience à la Bandersnatch. I specifically asked the filmmakers about the timing of the film, since "Choose Your Own Adventure"-type movies are new and poised to become the next big thing. They started working on it in 2013, shot it in 2015, and released it in 2016.

Before viewing the film, we were instructed to download an app called CtrlMovie. I was a little concerned, since it was the end of the day and my phone's battery was at 38%. However, it used very little power, and over the course of 70 minutes or so, I still had at least 18% left when we were finished.

Now, on to the actual movie. We found out at the end, that there were 180 decisions to be made. The choices would be decided by the majority of users participating. The majority would often select different options than what I had chosen. As the audience dwindled, I found that my vote became stronger. Toward the middle/end, we had to choose if the main character was going to get into a fight... two times. The audience was mainly female at this point, so both times we declined any altercation. The filmmakers revealed in the Q&A that in places like Russia, people tended to choose the violent option.

Sometimes when the audience made a choice, it would seem that the characters would go with the other option anyway: the audience chose "keep pepper spray" and the character ended up dropping it not longer after. Also, when a random person asked our main character for directions, the audience chose for him to direct the stranger to the board rather than explain. But when we chose "board", the person who requested assistance became frustrated and our hero ended up giving him directions anyway. In my third and final example, we also had to choose whether the main character would go to the ground floor of a building or the car park. We chose ground floor and yet, the character ended up at the car park anyway.

It was also revealed that there were seven different endings. The filmmakers said we unlocked the happy Hollywood ending. It would be interesting to see the different combos, but with 180 decisions (minus some options where the outcome would be the same no matter what the audience chose) it would take awhile to sort through everything.

The movie is available on platforms including Steam and the App Store for iOS devices.